You can also find this post as an instructable.

I’ve also submitted this instructable to the Leftovers Challenge contest over there, so please vote for it if you like it.

I hate the basic push stick that comes with our table saw. It’s uncomfortable for nearly everything but especially for smaller cuts. I was doing a project that needed long (60cm) cuts as tiny as 1cm and I was going to chop of my fingers off if I attempted it with the included push stick. So in the moment I improvised and made myself a better push stick or as I like to call it, my helper hand, out of a scrap piece of wood. I’m sure there are better push sticks you can buy and I could come up with a few other designs, but this was about a fast, cheap, single material solution, plus you can put some of those scrap pieces of wood from larger projects to good use and you don’t have to worry about accidentally cutting the stick.

The one in my right hand in the photo was the “prototype” I made in the moment out of a failed attempt at some fingers (hence the angle + grooves). I managed to make all my cuts with just that one and the white scrap piece to hold the wood down (so the reverse positions from above), but if I had made two it would have been even easier, I just didn’t have the time. So in this tutorial I’ll be finishing the second one, and making it a bit neater. It’ll get some cuts in it eventually, but the main surfaces on my first one where a bit uneven. Plus there’s less random cuts to ignore.

Skip down to see some examples.

Wood - You’ll need a piece about the size of your hand and at least 2cm thick. I’m using a piece of MDF (my dad builds MDF cabinets). He always has relatively large scrap pieces like this one that he has no use for. When you grab it your fingers should be an inch of two from the bottom to make sure even with thicker pieces they don’t reach the blade. And then it should be just slightly longer than your hand when you’re grabbing it. 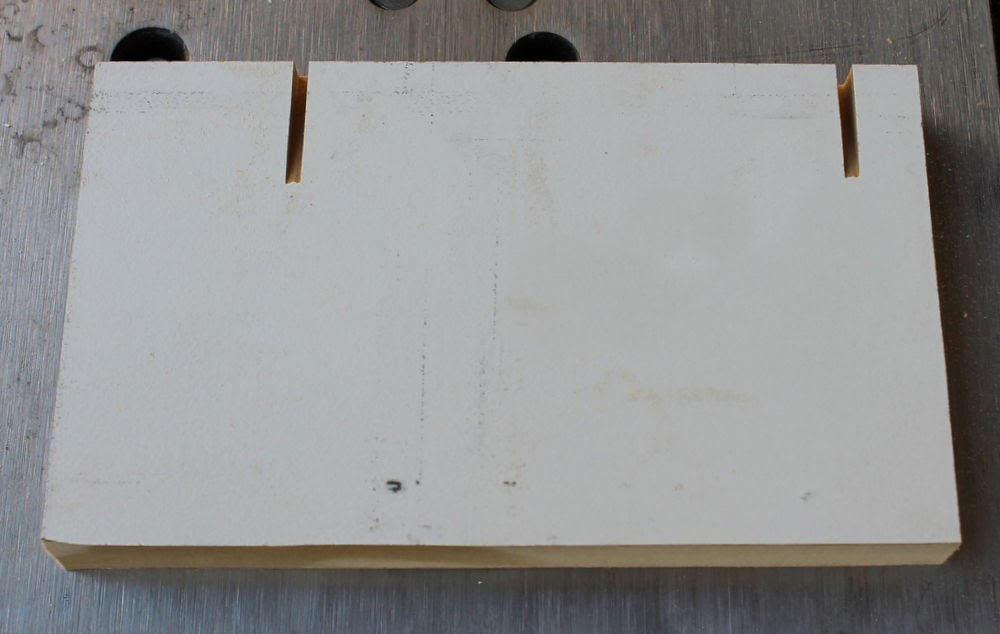 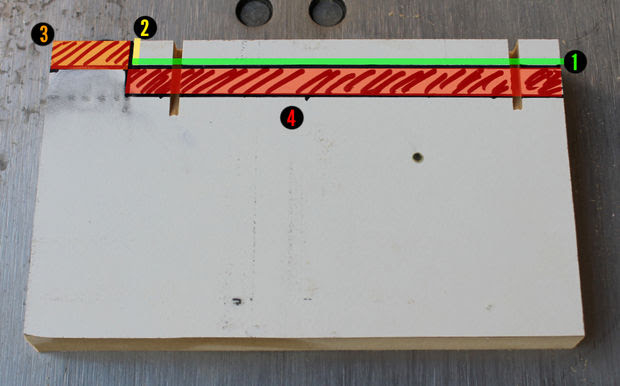 My piece already had some earlier cuts so I cut away as many as possible. I couldn’t get rid of those two cuts, ignore them. To better illustrate everything I’ve numbered and color coded the actual cuts. I’ve tried two ways of doing this. I think this one is better because it’s smoother. I’ll let you battle it out with your saw if you want to do it different. See the second image for my measurements. This is for a 2cm piece with an outer L 1cm thick, sturdy but not too thick. The small white part will be cut away and the scribbled parts are the areas that will only be cut part way through.

When I say raise the saw high it’s better but not necessary if you raise the saw as high as it will go. This is dangerous. Be extra careful if you do. Regardless you’ll still need it to be pretty high (I think around 2cm higher than the piece at least) otherwise you’ll cut too much.

Edit: I’ve redone the pictures and some of the instructions. Hopefully it’s clearer now. 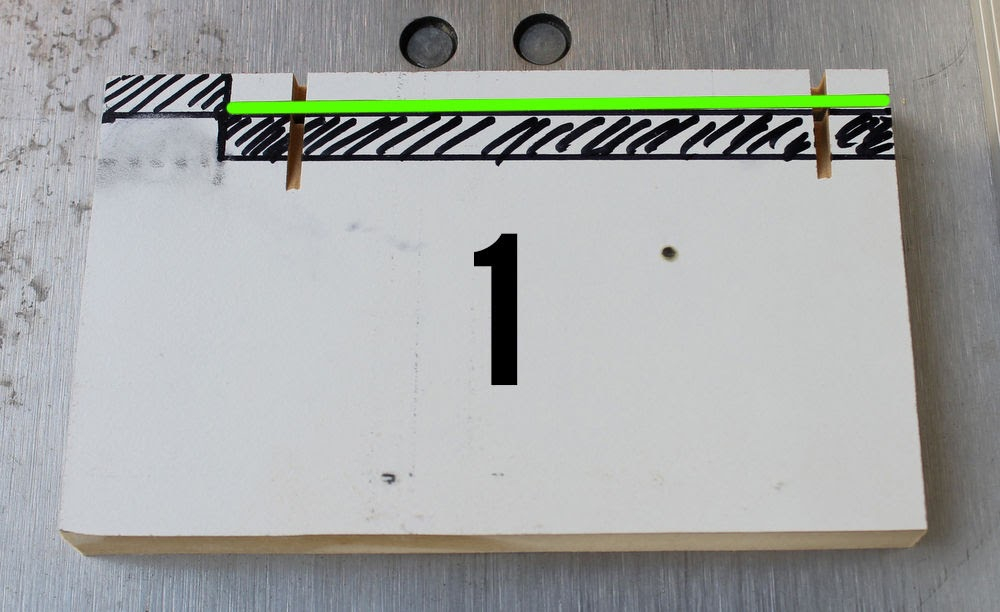 For cut #1 (yellow) raise the saw high and cut until you reach mark #2 (yellow). 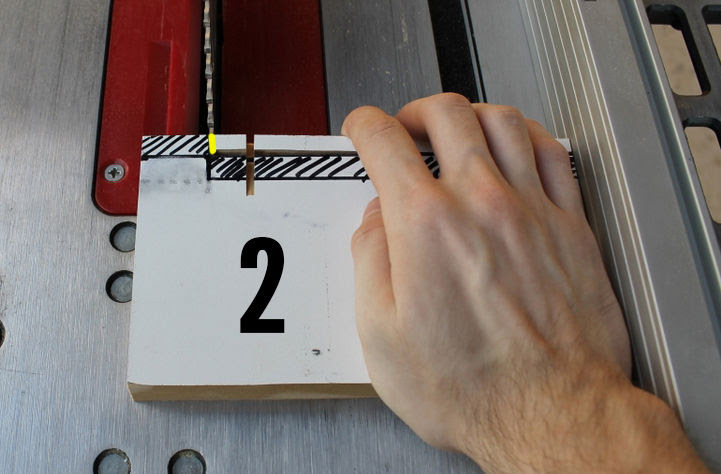 With cut #2, hold down the piece as shown so it doesn’t fly anywhere. Cut until it snaps inwards. 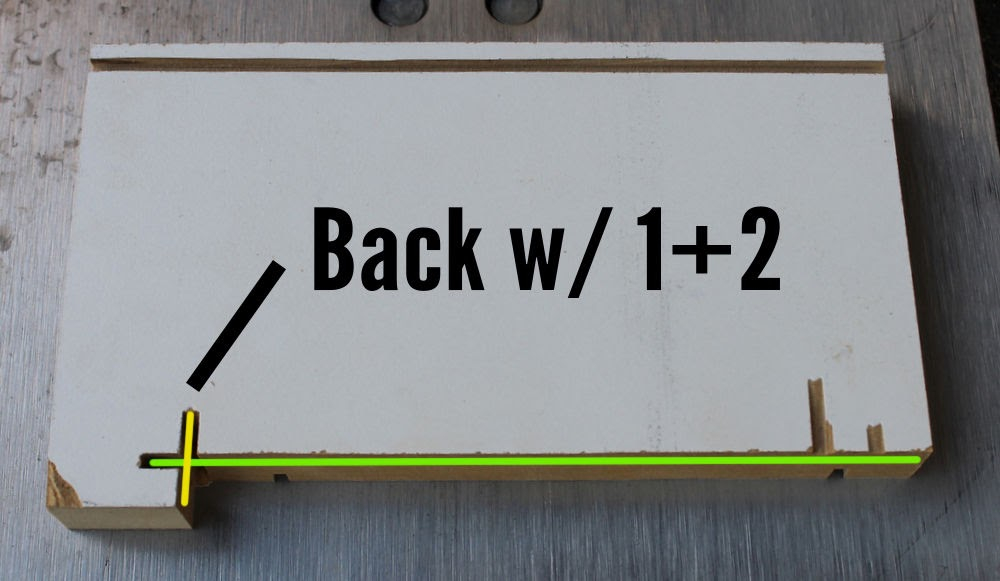 You’ll notice in the back, even with the saw raised, you’ll inevitably cut more than you need depending on how high you raise the saw. There’s ways to avoid this if this were a project where presentation was important, but it isn’t, and later you won’t be able to avoid this. Just ignore them.

This cut would get cut away with time as you did thinner and thinner cuts, but I cut it anyway.

Set the saw to just slightly less than half the piece (~1cm). It’s better to cut too little than too much.

You can start from the outside with the [width of piece - saw width] then move inwards or do what I did and cut outwards. 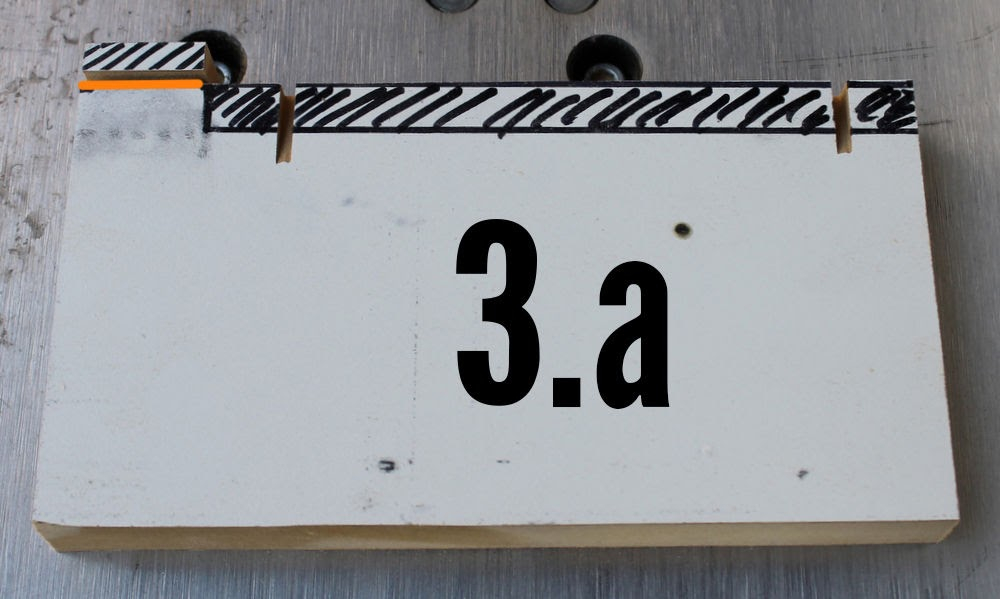 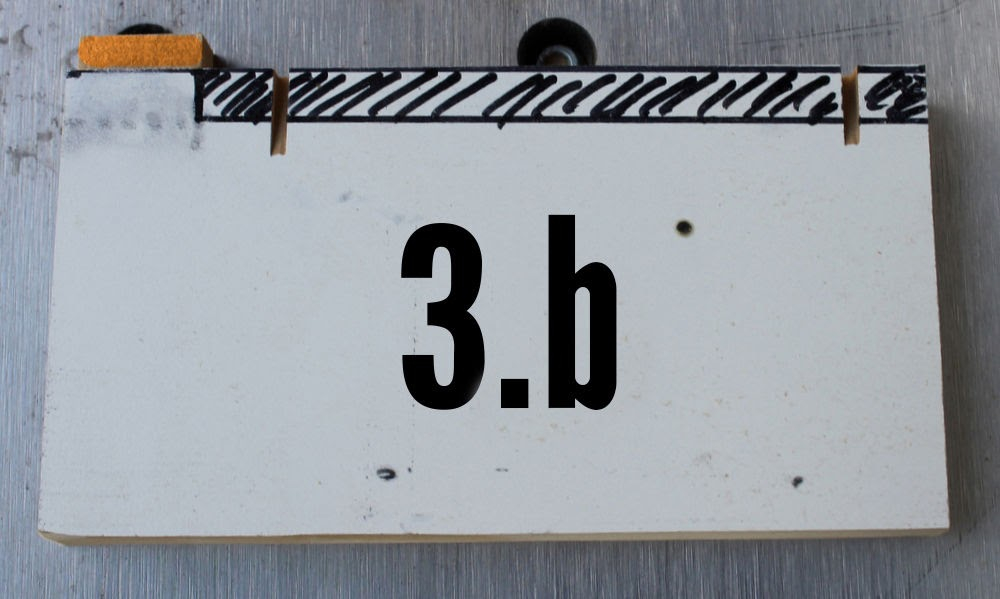 Now we’re going to cut the other L. 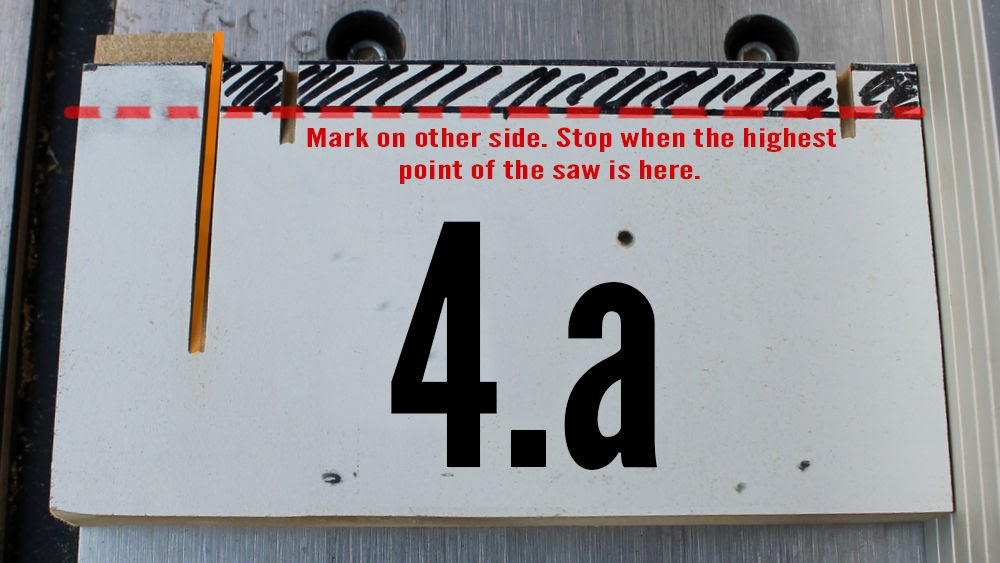 Copy the 2cm mark in red to the other side. We’ll be cutting with the “back” up. Now cut perpendicular to it until the highest point of the saw reaches the mark. 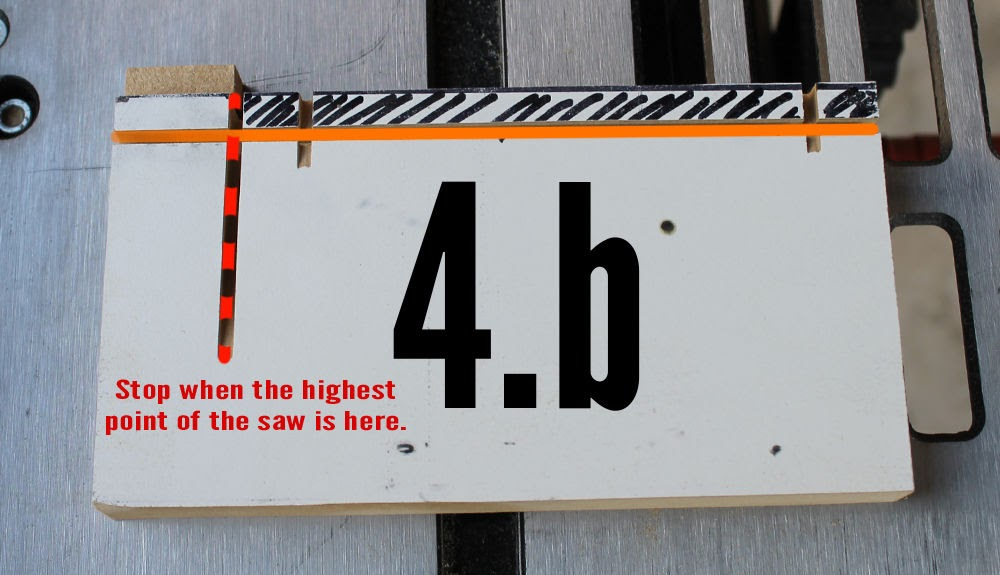 Do the same with 4b. You won’t need to mark it because you’ll already have the previous cut to guide you.

When you flip it back around it should look like the second image below. It doesn’t matter that the cut went through to the edge. 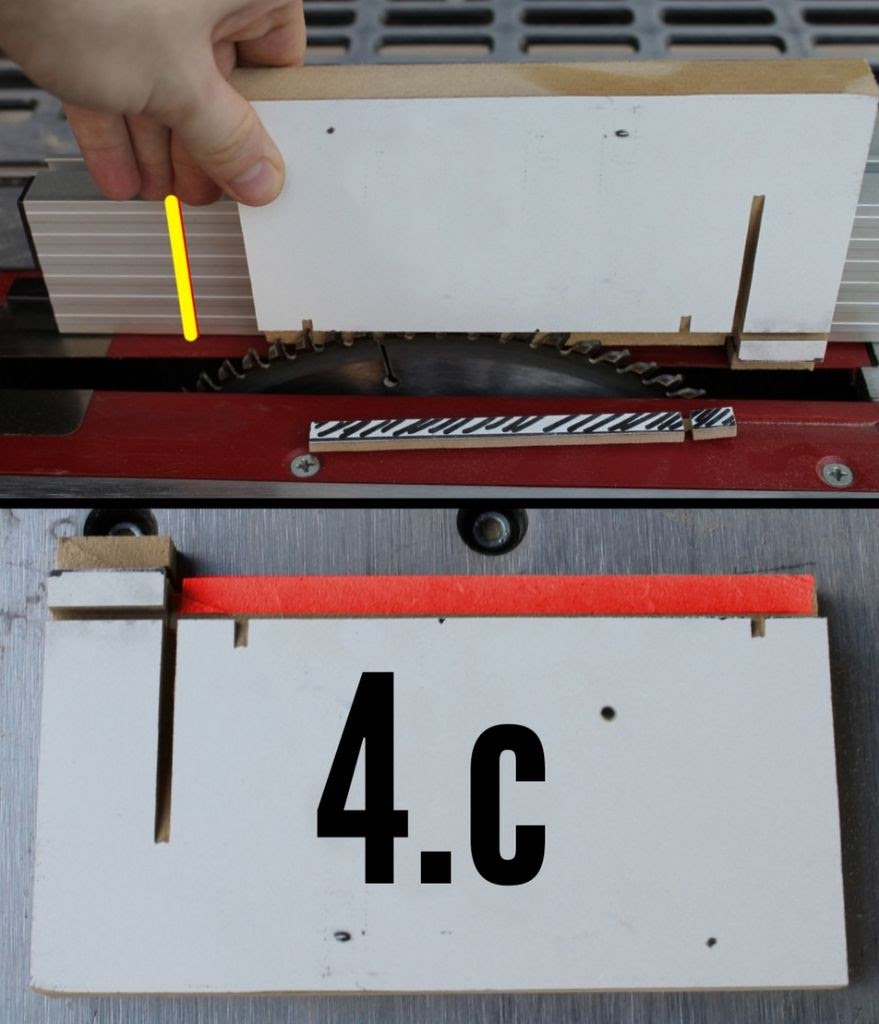 Now to cut that last part off, what I did as you can see in 4c is with one hand I held the piece at about the right height and then with the guide set at 1cm cut in until that scribbled piece fell off. The first time I did this like I did cut #3 but what happens is that since you can’t cut into the little L bit sticking out you have to stop the saw way earlier and then you’d have to cut away at the remaining wood by hand. I managed, but the result was not very smooth. This method although a bit odd is better.

See the next step for different ways to use them. Ideally you should make two, but you can make do with one and a block or at least one and one with and just the first two cuts.

Here’s some photos of me using them. They’ve completely replaced the push stick that came with the saw for me and it’s also really helped to just have something square on hand when cutting thin pieces where I either can’t put the miter guide where I need it, or it’s too far away. Plus since they’re made out of scraps there’s no hesitation about cutting into them. I can press a piece down over the saw and basically use them as an extension of my hands, greatly reducing any danger when doing otherwise dangerous or awkward cuts.

Pictures From / Used in the following Instructables/Posts

Drawers that Open to an Angle (Coming SoonTM)