Flickr has a large collection of photos from museums and such that are out of copyright or with no known copyright restrictions. You could go to the individual museums but it’s much easier to search them through Flickr. Anyways, I will occasionally search such images. They’re usually old and rather boring but occasionally there will be some interesting ones like the two above.

I had actually planned on sketching the faces and everything as well with the first sketch, but I had started with the shirts, finished those first, and I just loved how they looked without hands/faces so I left them like that. Both sketches were also drawn with the figures closer than they actually were which I think gives them a strange dynamic. I like how it ended up so much I’m thinking of doing a painting in a similar style.

Here’s the original image for comparison: 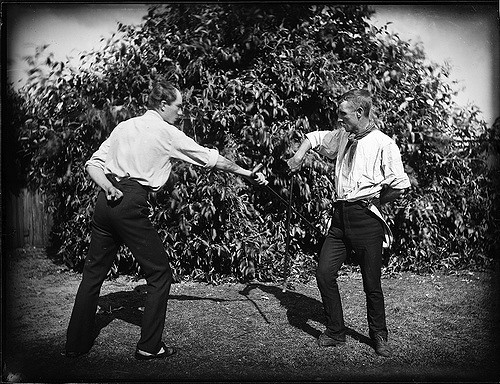 The second one is more similar to the original because I wasn’t quite sure where to stop. I didn’t draw their faces, but everything else was covered and therefore you don’t get the same effect from just drawing the clothing / inanimate objects.