This is an extension of Polymer Clay Basics - Part I.

I initially did a few rough experiments myself though with different substances. I only thought of a few things I had on hand (not baby oil), then I redid part of the test with the baby oil but I didn't bake it exactly the same (the first test you see in the pictures was slightly overcooked). So it was a bit of a mess but it told me that in a pinch you could use just about anything. At normal cooking temperatures there was very little difference in coloration. There were some differences in flexibility but Fimo is so flexible no piece broke from the bending. 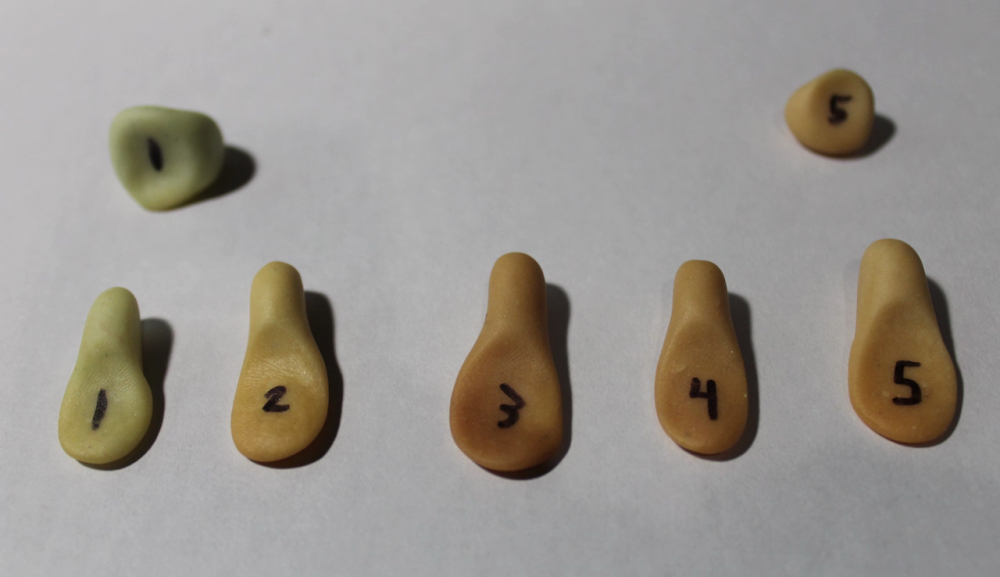 The results as best as I could present them are below.

I was unsatisfied with these so I redid them, adding every chemical I could think of, even inpractical ones. Unfortantely although my methodology was much more consistent (5mm thick x 10cm long strips curved into a loop and small 1mm flattened strips), Super Sculpey is so fragile the strength tests I feel are a bit inconclusive.

From left to right.

First of all None was kneaded as much as possible without adding anything to soften it, I didn't just cook an old fragile chunk, it would have been impossible (it just crumbles).

Visible cracks means any visible cracks in the loops I made after baking them, though they were formed when bending the raw clay.

Force Required to Break means I got the loops of clay and pressed them against the scale by hand (I couldn't think of a more accurate way to do this) then noted the approximate point at which they broke and repeated again just in case it was a weak crack that caused it. But that's still too few sample I think to really know.

With flexibility, like I said, none of them flexed. I was hoping one of the substances would give the fragile Super Sculpey a bit more flexibility but none did.

There is no discoloration at regular cooking time and temperatures, but I will be forcing them to discolor by overcooking and updating the chart when that's done.

All in all I'm a bit disappointed and will be continuing tests when I can afford it. I will probably use Fimo or a mix of Fimo and Super Sculpey, maybe also testing just how much detail each can hold in comparison. Even though as I have shown, any flexibility any substance might add won't be noticeable with Super Sculpey, Fimo is more flexible and will allow me to more accurately measure any differences.